From: IEEE – The Institute 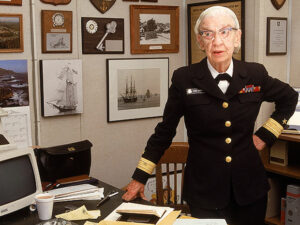 Known for: Inventing the computer compiler and leading the development of the programming language COBOL (common business-oriented language).

Why it matters: Hopper is considered one of the founders of the information age. Her compiler, a collection of coded instructions that could be reused, saved programmers from having to write each program anew. It significantly advanced the art of programming. By the late 1970s, COBOL was the most extensively used computer language in the world.

Where she started: Hopper was a mathematics professor at Vassar College, in Poughkeepsie, N.Y., when she joined the U.S. Navy Waves (women accepted for voluntary service) program in December 1943. She was commissioned a lieutenant the following year. She was named an IEEE Fellow in 1962 “for contributions in the field of automatic programming.”

Breakthrough: As a Navy lieutenant, she was assigned in 1944 to program the Mark I Automatic Sequence Controlled Calculator at Harvard under Howard Aiken, a computing pioneer. The Mark 1, one of the first programmable computers, is an IEEE Milestone.

This entry was posted in Computing, IEEE. Bookmark the permalink.