This voice-controlled robot could walk, talk, and smoke, and it captivated crowds 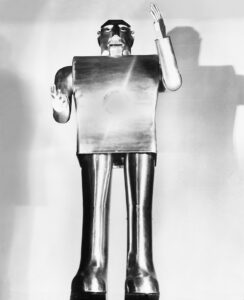 “Ladies and gentlemen, I’ll be very glad to tell my story. I am a smart fellow as I have a very fine brain of 48 electrical relays.” This is how Elektro the robot introduced itself to crowds at the 1939 New York World’s Fair. Standing 2.1 meters tall and weighing 118 kilograms, Elektro performed 26 different tricks, including walking, talking, counting, and singing. It had a vocabulary of approximately 700 words, although its responses were all prerecorded and played back from 33⅓-rpm records. One of Elektro’s pet lines was, “My brain is bigger than yours.” At 25 kg, it certainly was.

Elektro was one of a family of robots that evolved out of Westinghouse’s switchgear business. By the early 1920s, the company had succeeded in developing fully automatic electrical substations, and its engineers were looking for ways to improve them. One operator requested a way to call the substation system remotely and initiate a change in the normal operating routine. Thus was born Televox, a set of control units that started Westinghouse down the path to developing robots.

Roy J. Wensley designed Televox to change switches in a substation in response to sounds it detected. One half of the Televox unit sat on the desk of a dispatcher at a central power station and the other at the substation. The Televox at the central station used tuning-fork oscillators to create different frequencies, which formed a code that the receiving Televox could interpret. The operator would send the code to the substation over an existing phone line. The receiver unit had to raise the telephone receiver, process the incoming codes, and then respond with the appropriate action, such as opening or closing a particular switch.

Wensley saw plenty of potential uses for the device in the public utility field. He asked the advertising department to help with publicity but was turned down. He did, however, have enough in his discretionary project budget to build a portable demonstration model of the Televox. A 1928 advertisement promoted the Televox as “a new instrument which is to become the servant of the future.” But Wensley had the intuition of a salesman and knew his box of relays and wires wouldn’t appeal to nontechnical audiences, and so he decided to dress it up a bit.

On 21 February 1928, Herbert Televox made its debut at the Level Club in New York City. This “robot” was simply a crude humanoid form (head, articulated arms, and legs) made out of wallboard with the Televox control unit forming the body. Herbert Televox’s great trick: unveiling a portrait of George Washington in honor of Washington’s Birthday. Giving a name, face, and personality to a control unit turned out to be a stroke of genius, capturing the popular imagination for the possibilities of robotics. 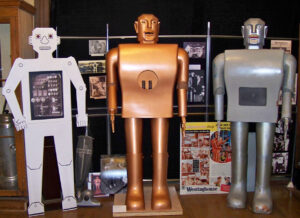 Robot Family: Herbert Televox [left] was Westinghouse’s first human-form robot. The more famous member of the Westinghouse robot family was Elektro; a copy is shown in the middle, while the original is on the right.

In 1929, Wensley was serendipitously assigned to coordinate the engineering and marketing of refrigerators. This led him to the Westinghouse Appliance Division, in Mansfield, Ohio, where he met several likeminded engineers. They soon rolled out Katrina van Televox, Rastus, and a few other robots. With each iteration, the engineers worked to refine the machines’ movement, sound, control, and skill set.

Elektro was their ultimate creation. Built by J.M. Barnett, Jack Weeks Sr., Harold Gorsuch, and other engineers at the Mansfield plant, the robot had a torso, arms, and legs made from aluminum sheeting. Its head and hands were cast aluminum. Other parts were pilfered from the factory—power cords from irons, coffee pots, and waffle makers, wheels from vacuum cleaners.

Elektro wowed audiences, first at the World’s Fair and then on tour across the country, and it hawked appliances for Westinghouse. But you’d be wrong to dismiss it as simply a publicity stunt. The engineers who developed Elektro were pioneers, attempting to turn science fiction into reality by developing a voice-activated robot.

An operator gave voice commands to Elektro through a microphone, but the robot didn’t actually understand the words. According to an article in the August 1939 issue of Radio-Craft magazine, the voice commands were carefully timed syllabic codes, which were turned into electrical pulses by a grid-glow tube [PDF]. The pulse opened a shutter in front of a lightbulb, sending a flash signal across the room to a photoelectric tube in the robot’s control unit, located offstage. This “electric eye” translated the signal into an electric current and transmitted it through telephone relays to start Elektro’s gears whirring.

According to C. Bruce Hardy, who toured with Elektro in 1942–43, all of the commands that started or ended a trick followed a 3-1-2 syllable pattern, with pauses between the phrasing. For example, “Will you come / down / front please?” would start Elektro moving forward. “You have come / far / enough” would make the robot stop. Operators could vary the wording as long as they kept to the pattern. “Tell us how / old / you are” and “Count your age / with / fingers” both could trigger the same trick. But operators stuck to an orchestrated script; they didn’t jump around in the program.

Although walking was one of Elektro’s trumpeted tricks, the robot didn’t really walk. Its left knee bent, with the right leg dragging behind, as it moved on wheels along a track in the stage.

Like the other Westinghouse humanoids, Elektro smoked cigarettes. An assistant would helpfully place a cigarette in a hole in the robot’s upper lip and light it. Elektro would take a few drags, exhaling the smoke in short puffs before the assistant extinguished it. After each performance, operators had to clean the tar out of the smoking mechanism’s tubing. Cigarette-smoking robots still exist today, but instead of casually lighting up, they puff away in laboratories to aid research on lung disease. 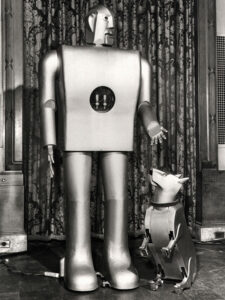 Robot’s Best Friend: Westinghouse introduced Sparko the dog as a companion for Elektro.

In 1941 a second hole was added to Elektro’s upper lip, but this one was for a more innocuous party trick. Elektro liked to challenge audience members to balloon-blowing competitions, seeing who could burst the balloon first. Equipped with an air hose and compressor, the robot almost always won.

Elektro’s dog, Sparko, was added to the World’s Fair show in 1940. Sparko could move forward and back, sit down, turn its head, wag its tail, and bark. Don Lee Hadley designed Sparko based on his own Scottish terrier, Bonnie. Westinghouse commissioned three dogs (the prototype plus a companion each for Elektro and another Westinghouse robot, Willie Vocalite), but none are known to survive today.

Recently, I created a biography page for Elektro on IMDb, where it now joins other robot movie stars like Alexa, Siri, and Robby the Robot. Elektro starred in The Middleton Family at the New York World’s Fair, a 1939 film produced by Westinghouse to help promote the company’s appliances.

It also appeared on the television show You Asked for It hosted by Art Baker in 1951, returning the following year as a finalist for the most popular episode of the previous year. And for several years after the World’s Fair and again after World War II, Elektro toured the country doing live performances, mostly in the housewares sections of department stores.

In 1958, a talent agent spotted the aging robot in a Westinghouse exhibit at Pacific Ocean Park, near Los Angeles, where it was playing second fiddle to a one-third-scale model of the nuclear-powered Nautilus submarine. That sighting earned Elektro a role as S.A.M. Thinko in 1960’s Sex Kittens Go to College. The Sequential Auxiliary Modulator blew a few fuses when confronted by the brilliant mind of Mamie van Doren’s Dr. Mathilda West, or possibly it was some of her other features. I suppose there’s humor in the blatant sexism of this B movie, if only the reality didn’t exist to this day in so many academic settings.

After its brief time in Hollywood, Elektro was packed into crates, sent back to its birthplace, and all but forgotten. The robot managed to survive the scrap heap and found a home at the Mansfield Memorial Museum, in Ohio, where it is now on permanent display. The museum’s director, Scott Schaut, has accumulated a tremendous archive of material related to the development of robotics at Westinghouse. He’s always on the lookout for more, although he says it saddens him to know how much history has already been destroyed. “Every day, historical artifacts are discarded or thrown in the trash without any regard to their significance to the community and the posterity of history,” Schaut writes in his book Robots of Westinghouse, 1924–Today, which reproduces numerous photos and promotional materials documenting Elektro’s history.

The book concludes with an intriguing scenario: What if Elektro had a female companion? Schaut knows of six sketches of women robots, created by Westinghouse’s robot team. They have some of Elektro’s features, such as the circular light in the chest, but they differ in hairstyle, facial expression, and bust and hip measurements. Plus, all of the lady robots are wearing dresses. Sadly, an Elektra never seems to have been built.

This entry was posted in IEEE, Robot News. Bookmark the permalink.